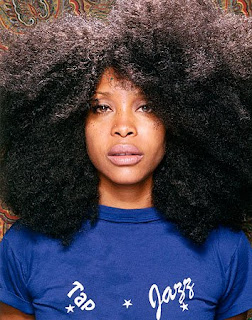 On a warm spring night after performing to a jam packed arena of her biggest Birmingham supporters, the Queen of Neo Soul lounges on a sofa in her hotel room. At a dining room table not far off, her body guard and agent have struck up a candid conversation. Like an old girlfriend, Erykah Badu excitedly directs us to sit with her on her sofa and easy chairs. She munches contentedly on a tray bearing bunches of red and green grapes, slices of granny smiths and huge strawberries while waiting for us to start our interview.
An impromptu interview at that. A chance meeting at the lobby’s front desk, led to an animated conversation about natural hair, which was followed by us joining her entourage, getting jealous looks from star struck observers and now, sitting in her hotel room trying all but in vain to stay professional.
Our camera has spazzed under the pressure, so I pull out my phone and fidget nervously for the camcorder.
Ms. Badu is on the sofa. Candace is perched and thrilled beside her. My camera chimes that it’s recording.
Curlologists: Thank you for interviewing with us! So, I have never seen you with your hair straight. You seem to have embraced your natural hair even when pop culture wasn’t. What were the reasons behind that?
Erykah Badu: My hair is an aesthetic choice. And I don’t feel I have an obligation to wear it one way or the other but to health for myself.  And to me it’s healthier to, I guess, be as natural as you can in your most natural state.  At the same time, how you wear your hair is a political statement as well. Pretty much everything you do as a black woman is a political statement. I don’t feel like it’s a responsibility or anything cause at that point I’d be putting myself into a penitentiary and that wouldn’t be a natural state!  So the most natural thing to me is to stay as pure to or real to or close to who I am as possible.
C: So I know you know about the natural hair movement that’s sweeping the nation. What are your thoughts behind that if any?
EB: Not at this point. I really don’t [think] a lot about how people wear their hair right now, cause I’d rather see a person with a natural mind and processed head than a processed mind and natural head. I always feel like I’m a spiritual being first, a human being second, man or woman third, Black, White fourth. Nappy headed or whatever else anybody wanna call it, ‘good hair’, that’s last on my list. And it may be a result of not altering myself.
C: You don’t seem to be a person that’s influenced at all by anyone but yourself. Has that been constant through childhood or is that something you’ve been cultivating?
EB: Somewhat through childhood. But I’ve always been a non-conformists. I don’t know why, it’s just the way they made me whoever “they” be. But the confidence does develop over time like any other muscle, so yeah.  Being natural is really fresh but every once in the while, super natural!
Indeed, she is a super natural :)
Posted by Knotty and Nice at 9:49 AM

Knotty and Nice
We are a website that promotes the upkeep and uplifting of natural hair.